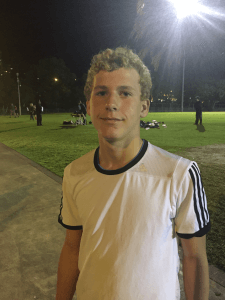 Congratulations to Austin Clark from our U15’s team.

Austin has been selected to play in the NSW CHSSA AFL (Combined High School Sports Association) team, the NSW Bulldogs!

Austin competed recently at the State carnival in Marrickville where he captained the Northern NSW team. While being voted MVP, he was also the only player to be selected from that team.

Selector’s feedback was that he was chosen for his kicking ability and his high work rate. He played well and consistently in all games which made him stand out.

After completing a three day training camp in Albury from 7th-9th July, Austin will compete at the  national carnival in Geelong from 17th – 25th July, 2015.

The is an outstanding achievement being one of 25 kids picked in the squad out of 200 that competed. Many kids in the that have competed in this competition past have gone on to play AFL professionally.